I play volleyball. I also watch movies. Volleyball does not get many movies made about it. I’d assume the main reason is because far fewer people play or watch volleyball than, say, baseball or football. I’d also assume a major reason is because it is a difficult sport to learn and to replicate on screen. Baseball is easy- people spend most of their time just standing around, and tons of actors played baseball growing up so are already familiar with what that standing around should look like. Boxing and golfing seem easier to film because you only need to focus on 1-2 people working individually- no teams and large balls to worry about.

There seem to be so few movies about volleyball out there there I have compiled a single-digit list of every volleyball movie I’ve ever heard of (Top Gun does NOT count!):

There’s something that bugs the crap out of me about every volleyball movie I’ve ever seen. Take a look at those plot synopses for those first four: person (or dog?) LEARNS volleyball. Guess what happens at the end of every movie? THEY WIN THE CHAMPIONSHIP! Yes, that’s right; they all start as total beginners, and by the end of the season, they are THE BEST PLAYERS. Often against professionals who have been learning, practicing, and playing this sport FOR DECADES. Results that instant would be miraculous. (The really crazy thing is that the one movie titled “The MIRACLE Season” is not only the only movie where the players didn’t just start learning the sport that season, but also happened to already be defending state champs, so I’m not sure how that counts as a miracle.)

The real world just doesn’t work that way. Learning a new sport to the point of mastery is HARD, and it takes a LOT of time. But so often in movies, the players just pick it up and suddenly go all the way, either winning the local championship, or entering the pros, or winning the professional championships. And I’ve gotta say, the most obscure the sport, the more likely the movie is to have its heroes start from scratch. So, here’s a running brainstorm of every film I can think of where a beginner takes it to eleven, starting with my vball faves:

Side Out: A slick young lawyer (played by the same kid who donned blackface to get into Harvard in the not-at-all-problematic hit comedy “Soul Man”) in a stuffy fancy suit shows up in LA, where he meets a former professional volleyball player. The lawyer realizes that his real dream in life is to be surrounded by neon bikinis instead of to earn a living. The former pro trains the lawyer for a few weeks until the big tournament, where they beat all of the professional players by using a super secret new volleyball move, and become the champions.

(“I think I like these hot chicks in bathing suits. Time to trade in my stuffy suit for a professional volleyball career.”)

Beach Kings/ Green Flash: A basketball star can’t play basketball anymore, disappears for a decade, then hangs out on a beach because he likes a sexy bikini chick. He trains in volleyball for a few weeks and then plays in the big tournament, where he holds his own against all of the professional players. My cousin has a couple brief scenes in this one, which is an irrelevant but fun fact.

(“I think I like these hot chicks in bathing suits. Time to trade in my basketball dreams for a professional volleyball career.”)

Cloud Nine:  Burt Reynolds (yes, really) decides he can make money to charge dudes to watch strippers play beach volleyball in sexy bikinis. The strippers want to be taken seriously, so they practice for a couple weeks, then all enter the big tournament where they hold their own against all of the professional players. I can’t remember if they win. 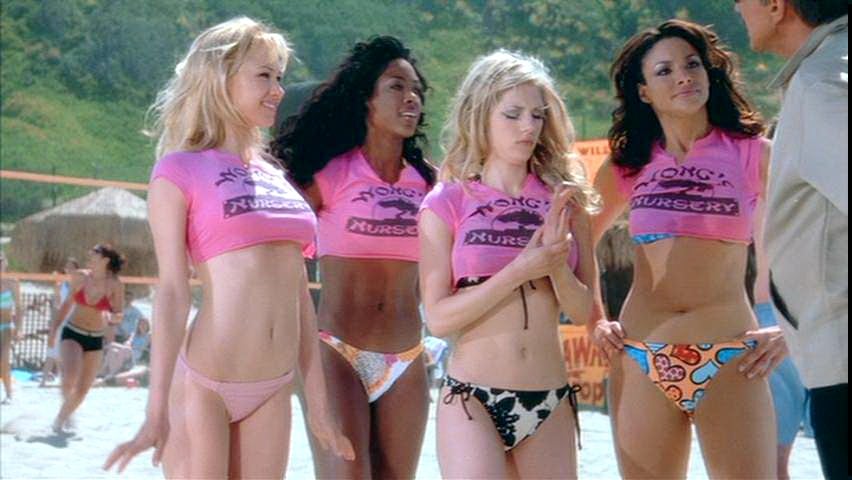 (“We’re sick of being just hot chicks in bathing suits. Time to trade in our stripper jobs for professional volleyball careers.”)

The Cutting Edge: A hockey player can’t play hockey anymore, so he starts trying pairs figure skating. He trains for a few months, then goes to the national championship, getting 3rd place against all the other best figure skaters in the entire country, and then goes to the Olympics, where they win the gold medal by doing a super secret new figure skating move.

(“I have the flexibility and grace of a morbidly obese buffalo. World champion figure skater sounds like an attainable goal.”)

Cool Runnings: An runner can’t run in the summer Olympics anymore, so he decides to learn how to bobsled even though he lives in Jamaica where there is no bobsledding. His team of non-bobsledders practice for a few months, then go to the winter Olympics. Being that this one is based on a true story, at least they end up losing horribly.

(“Are we doing this right? Yeah, we’re totally prepared for the fucking Olympics.”)

Eddie the Eagle: A downhill skiier can’t downhill ski anymore, so he practices ski jump for a couple months, then goes to the Olympics. This one also being based on a true story, he at least also loses horribly.

(“This seems like an appropriate time and place to try this for the very first time ever.”)

The Mighty Ducks One and Two: A figure skater (who can still figure skate!) and a bully who can hit things hard but has never ice skated before, join a ragtag youth hockey team. They train for a few weeks, then win the big championship game by using a super secret new hockey move. Just two years later, they are playing on Team USA, and are joined at the last minute by yet another figure skater, and a roller hockey player from “the streets.” They win the international championship.

UPDATE: It’s worth noting that I exempt most kids’ sports movies from this list. The vast majority of kids’ sports movies I can think of (Bad News Bears, Ladybugs, Kicking and Screaming, Little Giants, Hardball, etc- thanks Silvija for the list in the comments) involve a ragtag team of kids who already play to some degree, recruit a couple kids who have never played before, recruit a kid or two who are legitimately crazy good ringers, and then, through the power of teamwork and hilarity, end up winning the youth league big game. Any kid can win the youth league. It’s the youth league; their competitors are also just a bunch of kids learning the sport from scratch, even if their uniforms are shiny black and their coach wears aviator sunglasses. To make this list, those beginner kids have to go to the world series or something super crazy. I’ve decided to leave Mighty Ducks on there (with some editing to clarify and include the sequel) because in this case, the entire team is selected to become Team USA. It’s not the Olympics or the NHL, and technically I think they’ve had 2 years to train instead of a couple months, but it’s still pretty nuts.

(“So you’ve never ice skated before? Then I have the sport for you! Welcome to the national team.”)

Happy Gilmore: A hockey player can’t play hockey anymore, so he decided to learn how to play golf. He trains for a couple weeks, then enters a tournament where he wins the whole thing and joins the professional circuit. He wins the professional league championship by using his unorthodox new golf moves.

(Yeah, I know it’s a joke. But it technically fits so whatever.)

A Knight’s Tale: A poor squire who has never jousted sneaks illegally into a jousting tournament and wins. He trains for a few days and travels on the professional jousting circuit, beating all of the experienced jousters by using secret new jousting equipment. He goes to the jousting world championships, gets called out for cheating, and wins the championship anyway.

(“I think I like these hot chicks in anachronistic clothing. Time to trade in my squire job for an illegal professional  jousting career.”)

Got some more examples? Feel free to share! I’ll update later if I feel like it and can think of any.