Each year for the past few years, I have attempted to watch as many of that year’s Oscar nominees as possible before the awards are presented. It’s just a little personal challenge for fun, and I’ve had varying degrees of success in both seeing the films, and making predictions (ok that’s stretching the truth- my predictions are always failures). This year the nomination announcements caught me by surprise somehow. I’d managed to completely miss the Golden Globes (whose nominations I usually use to get a jump start), and for the first time ever, I have not seen a single one of the nominees already on my own. Doh! Lots of work to do! Last year I wrote up reviews of all the nominees I managed to see, and published both my predictions, and my reactions. I hope to do the same this year, but I’ll try to write up my reviews individually as I see the films, and then will do a big prediction post at the end. Today we focus on…

There is a lot to say about this film. On one hand, I’ve never seen anything like it before. But on the other hand, there is nothing new here. It’s a weird mix. But let’s start at the beginning…

I knew virtually nothing about this movie a week ago, except that it was a WWI film that was nominated for an Oscar so I’d likely have to go see it and would likely not like it. It’s not that I don’t like war films- it’s that they often tend to feel long and dragged out and tend to be pretty similar to one another. In this case I didn’t even hear anything about what it was about (meaning maybe it’s about nothing?) which made me nervous. Then I heard a review on the radio where the reviewer said that the film follows our protagonists the entire time with one long shot, and that the novelty wore off and dragged with a lack of plot. “Oh no! It’s the exact type of situation I am dreading!” I shared my hatred of long war movies to my brother, who pointed out that, it being all shot in one shot, it probably couldn’t drag on for too long.

Hold the phone. They didn’t ACTUALLY film a whole movie in one shot, did they? Surely it’s like Birdman, where they just creatively edited it to seem like one shot, right?

My brother claimed that, no, the director was inspired by Birdman and thought hey, let’s try it for real and just do a 2 hour long single take of a war movie! Well holy hell, that’s impressive!

But I was still weary, because someone already did a 20 minute shot of a WWI setting, and in a fabulous movie that had plenty of other stuff going for it besides this single gimmick. I am of course speaking of the masterpiece Atonement:

Turns out my memory is all jumbled. Atonement’s stellar long shot depicted Dunkirk during WWII (and did a way better job of it that the actual movie titled Dunkirk, which I hated). It’s also ONLY five minutes long! But holy cow, that’s an amazing five minutes of film making. Kudos.

I was likely confusing it with the opening sequence of Saving Private Ryan, which wasn’t shot to look like a single take but was an intense 20+ minute gritty World War battle:

This was all a long way to say that I entered the theatre apprehensive. I was worried that the entire film would rely on a gimmick, one that had already been attempted to some degree successfully by other films. I worried it would bring nothing new to the table. To a certain degree I was right. When the movie ended, I realized I hadn’t seen anything new here plot-wise. The similarities to Birdman, Atonement, and Private Ryan were all there.

The strength of the faux single take in this film was that it had the audience feeling the urgency of the protagonists’ mission, and as such, we could sense the adventure. It was extremely effective, but I also realized that I’d felt this way before. The Revenant and Taken (the first one, not that sequel garbage) come to mind.

This lack of originality in storytelling would be extremely difficult for me to overcome, particularly when considering whether this film deserves to be declared the best picture of the year. With all of that in mind, believe me when I say…

This movie will blow your mind.

Does it walk a fine tightrope? Absolutely. I tend to hate films that depend on tech while light on story. But in this case, I’ll make an exception for a handful of reasons. The main one was that the tech was both flawless and thoughtfully executed. Every single shot is gorgeous:

and chock full of details. I can’t find a screenshot of the early trench scenes, but living soldiers, dead bodies, and blown off body parts are eerily woven into the muddy landscape, silently but effectively driving home the misery of the setting.

Coincidentally, I had the sobering opportunity to visit some WWI sites in France last year. A century later, the scars of war remain. I appreciated that the film did a great job presenting the same feelings I had visiting the sites. We learned about the comparison between sturdily-engineered German trenches (pictured here still fully intact) and French/English trenches (mostly collapsed now), and this exact concept was presented in the film.

Our protagonists move from tortured mutilated landscapes into beautiful country landscapes and back again, another phenomenon I experienced while visiting. Even beautiful natural scenes and charming small towns hold on to the ghosts of these wars, and the film captured this disturbance when the characters moved into an an abandoned cherry orchard or swam along an ethereal stream.

Speaking of moving from location to location, there is one thing that I was reminded of more than anything else when watching this film:

That might sound dumb, but I mean it in the best possible way. We begin the film by selecting our players (in this case our two protagonists, one of which literally selects another as his Luigi-style sidekick). We walk into a room, where we meet a character who gives us a mission. He explains the gameplay. He gives us a timeline. And then we’re off, instantly jumping into the adventure! We stay close with our players, moving through the scenarios with them just like one would in a game. Level one is a long walk down the narrow trench, picking up tools along the way that we will likely need later in the game. We stop to talk to another kooky character, who gives up equipment that will likely come in handy later in the adventure. Then we move on to level two, crawling across no-man’s land and moving across an expertly-molded 3D landscape. I’ll stop the detailed run-through there, but over time we move from level to level, location to location, with a slightly different task and adventure in each space. Between adventures we stop gameplay to interact with characters who hand us some new context, then we head out into the game again. We don’t hold the controller in our hands, but otherwise, we feel like the player, along for the ride. I’d be curious to hear from any gamers about whether or not they agree.

I was worried this film would drag, and I’ve heard one or two others claim that it does. I didn’t find that at all. If anything, knowing that we were operating within the time constraints of the mission within the film, and the time constraints of the 2 hour run time, made this tale exciting from start to finish. We have a two hour movie and need to walk nine miles all in one continuous shot? Well holy cow how are going to do that?! Edge of my seat stuff. Being so directly attached to our characters felt, to me, much more engaging than something like The Revenant, where the torturous gauntlet this guy had to run seemed to never end no matter how much he survived. And knowing that we either make it to the end within the allotted time or don’t meant we knew the adventure would be short.

When the lights came on in the theatre, I turned to my spouse and said “Wow.” I meant it. This film is solid, strong, and effective. It will take you for a ride. And when the adventure is over, and you can stop holding your breathe and go back to normal life, you’ll finally have time to stop and think about what the fuck just happened. “It was technically incredible. But I also don’t think there’s anything new here.” But I’ve spent the last few days thinking and talking about this film, so I think the substance is more present than I at first realized. And I can say without a doubt that this film blows all of last year’s best picture nominees out of the water. It’s a strong contender, and one I highly recommend (especially on the big screen).

Bonus points for featuring cameos by so many beloved British actors, especially Andrew Scott, who recently stole my heart in Fleabag. 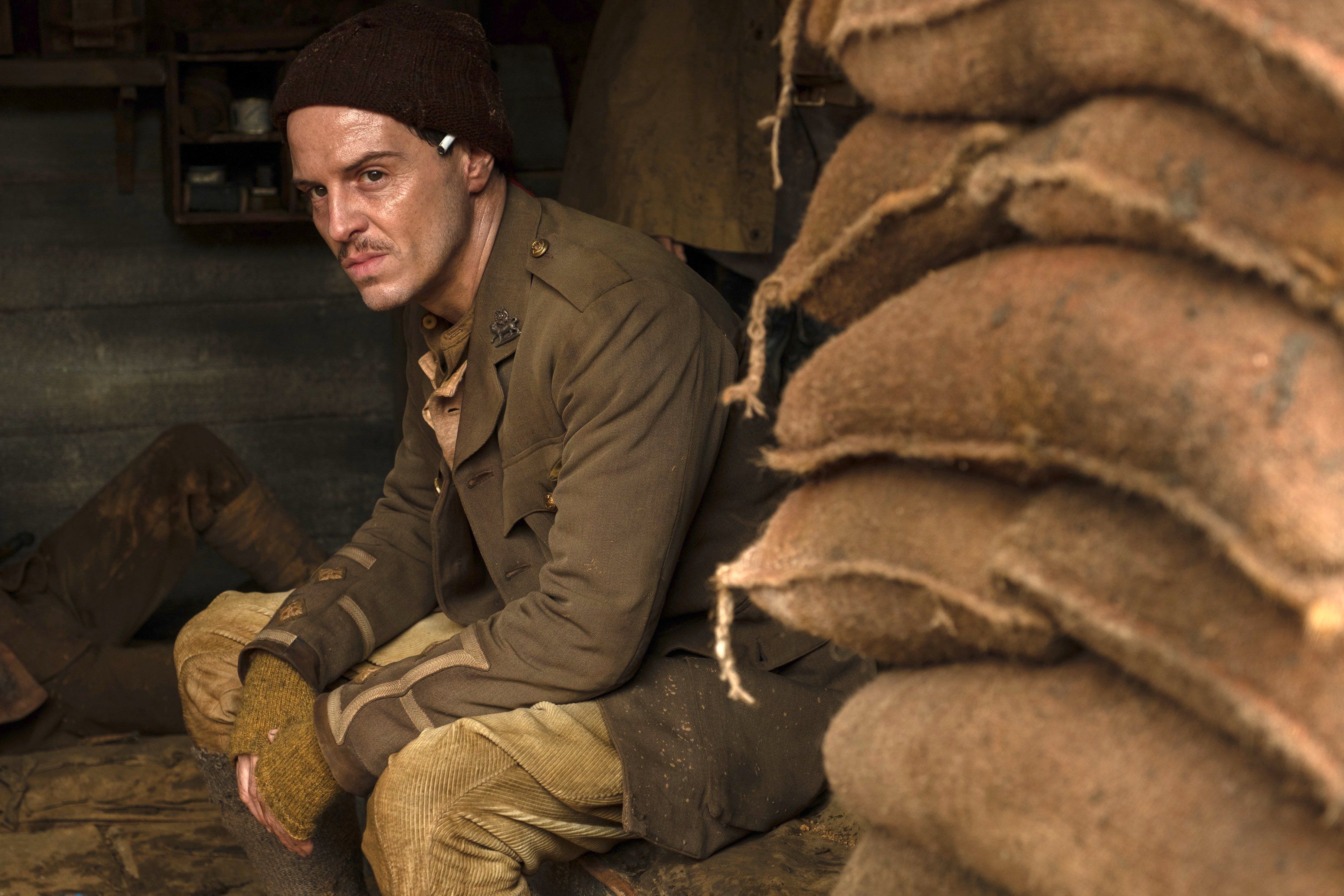